A sampling of cutting edge events and media stories that Off Centre has been a part of.  Browse to find out more about our creative pursuits and our involvement in the Toronto and International DJ & Electronic music community.

Kelly MacDonald and the AMI crew come by the studio to shoot the featured segment of Season 3 - Episode 2 of Blindsighted. As the title of the show suggests, Kelly is visually impaired and this DJ lesson with Off Centre's founder Erik Laar is one item selected from the ongoing attempt to empty his bucket list on TV!  More... 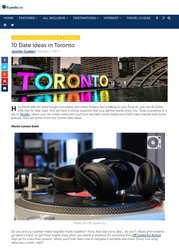 Off Centre is top of the list for Expedia's 10 Date Ideas in Toronto. "Music and romance go hand in hand, so get those fingers busy when you attend a weekend DJ workshop from Off Centre DJ School. Sign up for a two-hour session, where you’ll both learn how to navigate a turntable and mixer. Every love song deserves a remix, right?" Read More...

In September, Off Centre DJ School graduates were showcased over four days at Fan Expo Canada 2016 at the Metro Toronto Convention Centre. Their DJ skills were greatly received by the 130,000+ pop culture fans in attendance. The weekend was in a word - awesome! 15 current and former student DJs rocked the decks for 4 days of masked hero and villain intensity by bringing energy, creativity and entertainment to the event. The talent was evident as the students took the stage with confidence in front of the lively crowds. Watch Here

A staple of the city’s creative community, Off Centre DJ School is the brainchild of Erik Laar, AKA Circles & Squares, and his close friend/collaborator Cheldon Paterson, who goes by the DJ name SlowPitch.
Laar, who calls Leslieville home, started spinning records about 18 years ago when he was just 16 years old from the basement of his parents’ home in midtown Toronto. Read More...

"At Off Centre, an electronic music production school cozily tucked away in an east-end Toronto home, the children of Generation Z can revive their Chemical Brothers-era parents' passion for dance music... "  Read More...

As Canada’s leading child and youth mentoring charity, Big Brothers Big Sisters facilitates life-changing relationships that inspire and empower children and youth to reach their potential, both as individuals and citizens. In October of 2013 Off Centre had the privilege of opening its doors to some bigs and littles for a once in a lifetime opportunity to get behind the decks and learn some DJ skills. 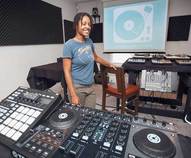 Talking to Smith, it becomes obvious that the commonality of her approach in the disciplines of production and teaching is an emphasis on the creative process. "What I'm really trying to push is trusting your ears and trusting in your gut. The approach to music isn't mechanical, it's more about a feeling."  Read More...

Off Centre on Toronto's CityNews

Known widely for reaching out to Toronto community centres, libraries, schools, festivals, and even for involvement in daycares  and local charities, Off Centre runs a series of "off location" workshops to spread the DJ gospel. Off Centre was recently invited to fly out for a series of week long DJ boot camps in Bermuda. Read more...

A nice article highlighting the launch of a specially designed course by Off Centre instructor Pursuit Grooves.
"Your sound palette has a lot to do with how you produce your music and how that represents you as an artist. I'm trying to teach tools that you can carry to other platforms." Read More...

On several occasions Off Centre has been invited to present DJ & Music Production workshops at various Toronto Public Library Branches around the city for their after school programs.

With so many schools in Toronto, from the Royal Conservatory of Music to nearly every grungy guitar shop basement, there are those that emerge to distinguish themselves by virtue of the lessons they offer or the mantra they tote.

All Scratched Up" Toronto Star Article 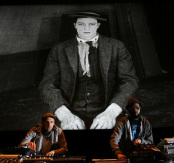 The turntablist duo Insideamind consistently pushes the boundaries of turntable creation and performance.  Founder of Off Centre DJ School Erik Laar (a.k.a. Steptone) and Cheldon Paterson (a.k.a. Professor Fingers), performed their turntable based soundtrack for a silent Buster Keaton film at Toronto's TIFF Bell Lightbox on February 21st 2011.  Read More...

"Where to Take DJ Lessons in Toronto" BlogTO Article

Off Centre DJ School is a downtown option for DJ lessons, offering a variety of programs and camps to learn to mix, blend, and scratch. Off Centre instructors include Erik "Steptone" Laar, one half of Toronto turntable band iNSiDEaMiND, and Cheldon "Pro-Ef" Paterson, who is also well known on the Toronto turntable scene. If you're keen on some intensive instruction, you can opt for Off Centre's Weekend DJ Workshop, which offers six hours of instruction over a weekend, or enroll in a six-week program, offered at a variety of skill levels. 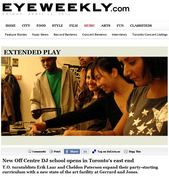 I can’t count the number of times I’ve been asked, "How do I learn to DJ?" over the years. Since 2004, one suggestion I've offered is the lessons given by turntablists Erik Laar a.k.a. Stepone and Cheldon Paterson a.k.a. Prof Fingers, both of iNSiDEaMiND. They launched their Off Centre DJ school seven years ago and have seen it grow steadily over time. This week Laar further expanded the curriculum and opened a new facility at Gerrard and Jones in the east end of Toronto. (by Denise Benson)

"Spring Break on the one's and two's" 24 hours Article 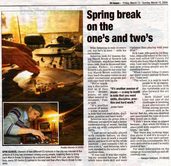 24 hours caught up with Off Centre to talk about our 2009 March Break camp.  This five day program which is designed to engage the imagination of students from all musical backgrounds brings together a series important tools: discipline, focus, and of course laughter.  The main focus = developing hand skills, basic music theory, and experimenting with different ways of playing with sound on the turntables.

For those who don’t play instruments, or are dissatisfied with traditional music education, DJing can be the right fit.
And now, more than ever, this art is easy and accessible to most people. “Back in the day, if you didn’t spend your $700 per turntable then you were dealing with really bad equipment. Now you can access decent equipment for much cheaper,” and cheaper means more accessible, and more accessible means everything goes faster and farther. Read More... 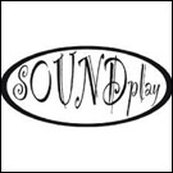 For the 2010 SoundPlay Fesival, Off Centre hooked up with Mike Hansen and NAISA for a unique event on Saturday Oct. 30th 8pm @ The Wychwood Barns.  An evening of "Visual Sound Performances", with the turntable falling right in the centre of it all. Students from Off Centre performed an 8 person piece using Califone turntables appropriately titled "Itch" 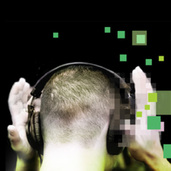 For one of several stops in the summer, Off Centre takes the DJ classroom on the road with our public workshop series! Celebrating their 7th year of cutting edge local and international icons OC joins the Break, Beats, and Culture Festival for workshops on Saturday July 10th and 11th at 4pm and 2:30pm...and it's all FREE!

Off Centre is proud to be providing the soundtrack for the 2010 AdoptWalk in Toronto. Taking place Sunday September 26th 11 - 3pm at Riverdale Park West, AdoptWalk will continue on the path to raise awareness and funds related to adoption. AdoptWalk participants, including parent groups; adoptive and foster families and their extended families, friends and co-workers; adoption professionals; and the general public walk to show their support for waiting children who dream of finding loving, permanent families.